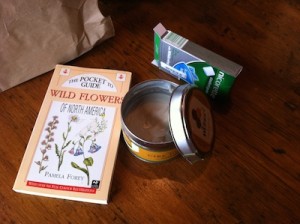 Of these four, which one doesn’t fit: rug, egg, drum, sex?

(Memory is a strange thing. I don’t beat myself up over the loss of it.)

No matter. The question surfaces as I contemplate the brown paper lunch bag in front of me.

Carolyn, our writing workshop leader, has brought a dozen such “goodie bags” to this week’s session; they are writing prompts.

“Each one holds three disparate objects,” she says (objects being today’s theme).

To further stimulate our creative juices, Carolyn reads a quotation from The Winter Vault, by Anne Michaels

Instructions follow the quotation: “Everyone choose a bag,” Carolyn tells the eight of us, “and use the contents as inspiration for a short piece. You have 20 minutes.”

Each of us selects our own potluck paper bag. Pens and pencils begin to scratch feverishly. I’m the only one here who “writes” on a laptop, and my fingers tap a bit too slowly for my liking. Perfectionism dies a slow death in my world.

Reading our work aloud when we’re done is joyful because the weekly workshop is a safe and supportive place.

High school on the other hand, was not.

Today’s brown paper bags look exactly like the ones in which I carried my lunch in grades eight, nine, 10 and 11–four years of high school during which I was too afraid to venture into the cafeteria at noon where I surely would have drowned in the heaving sea of my fellow students.

Or so I imagined at the time.

My little brown bag and I took refuge in the library’s safe harbour. Unseen in a cubicle between the book stacks, I crunched my way through lunch hours that felt more like snippets of eternity. Being library silent was no mean feat when the bag’s contents included carrot sticks, cut-up celery stalks and an apple. Being teenage me was no less challenging.

I pretended to read as I munched away between Chaucer and Elliot just as I pretended to be confident as I navigated the halls between periods.

Eating wasn’t allowed in the library (no food, no drinks, no talking), and had I been caught I guess I would have been punished. But I was never caught and I wasn’t punished, except by my peers for being who I was. That had nothing to do with lunch bags and everything to do with teenage insecurities – theirs and mine.

My starving self esteem and I hungered for acceptance. Maybe theirs did too.

“Hot and healing sweet and sour soul food to go, hold the bullying please,” I might have ordered in the cafeteria if I’d had the guts to dive in.

The brown paper bag sitting in front of me in the writing workshop doesn’t contain vegetable sticks or an apple or adolescent aspirations. At least I don’t think it does. Perhaps I will be surprised.

I unscrunch the top of the bag which is rolled to 1) make it easy to carry and 2) keep its contents secret until it’s time for them to be liberated. To be clear: I unscrunch it quietly, even though there’s no need for silence more than forty years later.

“Is some deep-seated part of me still afraid of getting caught?” I whisper to myself.

Wisely, myself doesn’t answer. There’s something to be said for being 58 and not 14.

I peek inside. No food–health, soul or otherwise. I extract the promised three objects:

I pick up the tin. It feels heavier than an empty one would; it must have something in it.

“Cire d’abbeille” it says on the green-mustard-and-white label. Beeswax. I wonder why beeswax is all one word and not hyphenated. I take the top off the tin. I’m right. There is something in it.

It’s half full of an opaque paste that looks to be the texture and consistency of congealed bacon fat from generous strips fried crisp to perfection which I used to love before I became mostly vegetarian, not, I might add, because of the contraband carrots and celery consumed in hiding in the library.

“It was a choice I made freely about 10 years ago,” I say in passing to no one in particular.

I lift the tin closer to my face, stick my nose in. Ah. A hint of honey. It is beeswax, like it says on the label. Isn’t it funny how some things are exactly what they appear to be and others aren’t at all?

That’s a question. One of those that guarantees there will be a future. (See quotation above.)

My first reaction to the three objects is to wonder which one doesn’t fit and why, like the puzzle of the rug, egg, drum and sex, and that of my adolescent self.

Must I tie them together – this empty Nicorette box, flowery book and half-full tin of unhyphenated beeswax simply because they came in a little brown paper bag like the one from my shy past?

But there it is plain as day! The answer is in the writing. None of them is a misfit like me. All three of my paper bag objects belong because each begins beautifully, bountifully, and blissfully with the letter “B”!

Bravo Susan, I pat myself on the back (which, as you may have noticed also begins with the letter “b” as does “bravo” of course). My friend and former boss Richard Best once told me I carried alliteration too far. His comment was in regards to an article on bougainvillea (note the “b” at the beginning) I penned while in Abu Dhabi (two unbeginning “b”s). I chose to ignore his advice on that piece; I choose to do so again in this one.

My previously underdeveloped self-esteem is now remarkably full blown (some may say out of proportion), but I think it’s nursery rhyme perfect: not too big, not too small, not too hot, not too cold, not too soft, not too bold–just right for the Goldilocks in me.

The story of my transformation is a much longer and more involved than I have time for today; some hints may be found here.

I wish I had solved my teenaged problems as easily as I connected today’s paper bag objects with the letter B, just like I bet you wish I would tell you the answer to the rug, egg, drum and sex quiz question.

But I think I won’t. No. I think I will save something for the future, just to prove it exists.