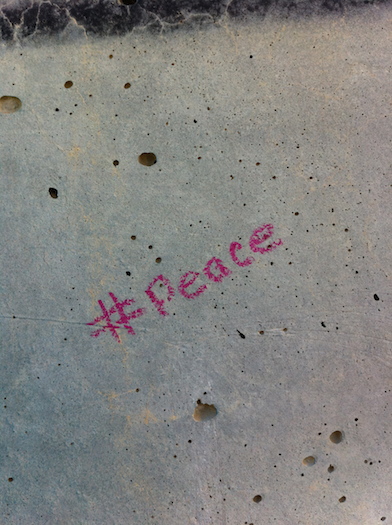 We can’t even talk about the Middle East amongst friends. A Facebook acquaintance commented to me that supporting Occupied Palestine and criticizing Israel’s actions was  “Jew bashing.”

I can only speak for myself and to tell you that my advocacy on behalf of Occupied Palestine has nothing whatsoever to do with “bashing Jews.”I have been a supporter of the PCRF – Palestine Children’s Relief Fund for years. One of the first stories I featured on my website Amazing Women Rock in 2008 was about an Arab Christian friend of mine Nadia Wehbe who was involved with PCRF.In 2011, I went to Ramallah for a TEDx conference. I spent six hours at the border crossing, had my passport taken from me, was interrogated and humiliated by Israeli immigration officials, had items stolen from luggage, witnessed the humiliation of others, etceteras.While in Occupied Palestine, I felt the terror and oppression the Palestinian people are subjected to every day at checkpoints. I saw the wall. I touched it and took pictures of it. I ate with Palestinians. I saw the poverty. I felt the despair. I heard the stories of people who had been robbed of everything but their will to fight.On the day the conference was to start Vittorio Arigoni a pro-Palestinian activist, pacifist, journalist and a friend of an acquaintance of mine was murdered, not by Israelis but by an extremist Palestinian faction. We made a video tribute to him the following day. I have “real-life” Jewish friends, and I have FB Jewish friends; some of us agree on Palestine/Israel; some of us don’t.I lived in the Middle East for 18 years. I have Christian, Buddhist, Muslim, Jewish, Hindu, agnostic and atheist friends. I have friends who don’t believe in anything whatsoever. I have British, German, Palestinian, Israeli, Australian, Canadian, American, French, Italian, Spanish, Indian, Malaysian, Japanese, Icelandic, Kenyan, Iraqi, Iranian friends as well as friends of other nationalities.This has nothing at all to do with “Jew bashing,” at least not for me.For me, it has everything to do with righting something that was wrong from the start (i.e. about 100 years ago as explained in this video) and remains wrong to this day. My stance would be the same whether Israelis were Jewish or Muslim or Catholic or had three heads.

She and I continue to “discuss.” Will our conversation make a difference in the outcomes? Extremely unlikely, though not impossible in some strange cosmic way.

What I do know for sure is if we can’t talk about conflictive issues like Palestine and Israel amongst friends in a rational, respectful and productive way, we can’t expect enemies to do so.

Besides going a little crazy in a good way, Susan Macaulay created and curates Amazing Women Rock, SheQuotes and My Alzheimer’s Story.

P.S. Here’s a simple explanation of the core issues from the Jewish Voice for Peace:

P.P.S. About an hour after I posted this piece, the FB friend with whom I had been debating blocked me.

a nursery rhyme for violent times

inspiration for underdogs: the story of david and goliath revisited